MQ2DPSAdv is designed to be the step up from MQ2DPS. It comes with a UI Window and is much more specific about the information it parses. The window displays information about live or past fights, depending on your selection. 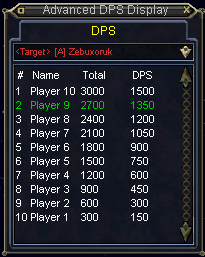 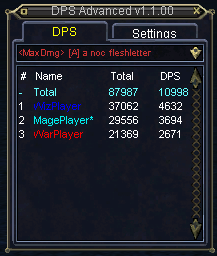 Placing the UI File in EQDir/uifiles/default is recommended. After loading the plugin you will need to reload your UI for the window to show up.

The two current choices for automatic updating are <Target> and <MaxDmg>.

Using the <MaxDmg> Setting, the List will show the active fight with the most total damage. If the current Max Dmg mob dies, the plugin will update to show the dmg of the new max damage fight as as soon as it registers atleast one hit since the death of the last max dmg mob (It will still include all damage done to that mob since the start though).

All fights are saved in the dropdown and can be viewed individually.

This plugin is included with the MMOBugs Binary Compile. Source is not available.